At Transdev, we are working on sustainable, zero-emission mobility solutions running on electricity or natural gas. At the same time, we are encouraging the use of soft mode and shared transport.

Train, tramway, bus, bus rapid transit, the transport offers are multiple. But is there a solution more likely to relieve congestion in European capitals and reduce pollution?

Christian Schreyer, CEO of TRANSDEV Northern and Central Europe, gives some answers on metropolitan mobility in this podcast by Geert Kloppenburg, mobility expert. Let’s go to Bogotá, where their BRT has proven its worth!

The Bus Rapid Transit in Bogota: a success story

In the 1990s, faced with a strong demographic explosion, the city of Bogotá suffocated, strangled by too much traffic. The bus network was unable to relieve the traffic congestion and it took the inhabitants an average of one and a half hour to reach the central station from the suburbs.

The government then decided to separate bus transport from the rest of the traffic. On these specific roads, large-capacity buses can thus travel very quickly. Residents are quickly won over by this fast mode of transport, which relieves traffic congestion on the roads.

We are proud to see that today our 660 buses have made the city of Bogotá breathable again.

“Whereas it used to take you an hour and a half in 1990 to come from the suburbs, today it only takes you 15 minutes to reach the city centre.” Christian Schreyer, CEO Transdev North and Central Europe. 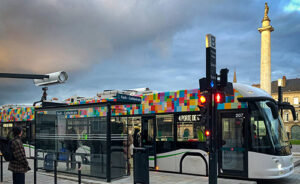 Även i Sverige kör Keolis elbussar i stadstrafiken i Karlstad.